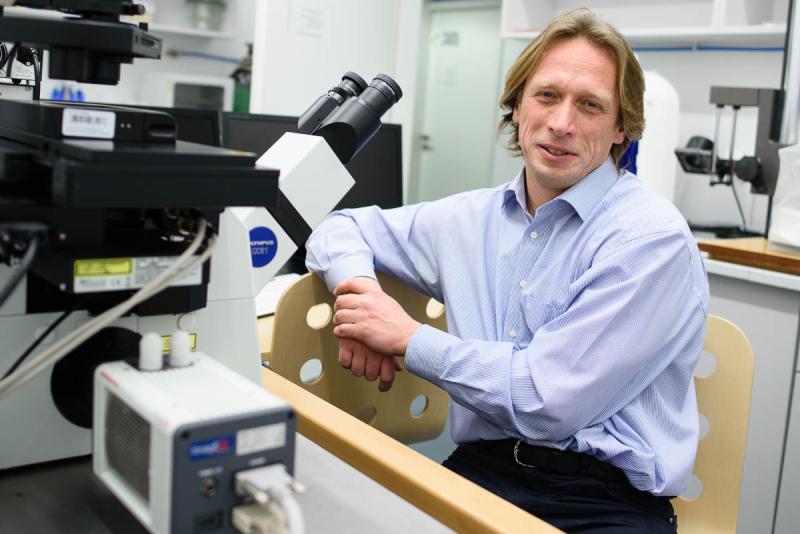 Uniquely, in 1993, he presented two lectures at the National Conference of the Undergraduate Research Society, in which he was first author. One lecture referenced HPLC measurements of brain neurotransmitters for which he was awarded Second Prize, while the other one was entitled “Non-linear dynamical approach of neuronal activity: chaos and single unit activity in the globus pallidus”, inspired by the emerging chaos theories of the time, for which he was awarded First Prize.

After earning his PhD, he spent two more years at the Molecular Neuroendocrinology Research Group of the Institute of Experimental Medicine, where his research focused on stress-related neuronal networks.

Between 2000 and 2002, he was a Marie Curie Fellow at the Babraham Institute in Cambridge, England, where he developed a lifelong professional relationship with Professors Allan Herbison and Seong Kyu Han. His interest then shifted towards studying the non-genomic effects of estrogen in the brain.

Following his return home, he became one of the leading researchers in the Neurobiology Research Group of the MTA at-ELTE for a period lasting four years, in which he continued studying the effects of estrogen in the brain. During this time, two PhD students obtained their doctoral degrees under his professional supervision.

In 2007, he was offered the opportunity to set up and manage his own research group at the University of Otago in New Zealand, where he achieved considerable professional success. During the six years he spent in New Zealand, two other students completed their PhDs under his guidance. While in Otago, he developed a close collaboration with Professor Akihiro Kusumi in the field of single molecule detection. It was this collaboration which gradually shifted his interest towards super-resolution microscopy.

Despite his success abroad, his heart always remained in Hungary, where he envisioned a future for his children and his family. Eventually, he returned to his Alma Mater in 2011.

With the support of the Albert Szent-Györgyi Scholarship, among others, Professor Ábrahám began implementing his innovative ideas in 2013. Following his appointment as Professor, he founded the Molecular Neuroendocrinology Research Group, which has consistently undergone expansion, and evolved into a professionally diverse and exceptionally cohesive group in the following years.

He was instrumental in founding and chairing the first Centre for Neuroscience in the country, at the University of Pécs. Professor Ábrahám served on several editorial boards of international scientific journals and scientific societies. In early 2021, he was elected President of the Hungarian Neuroscience Society.

Following his appointment as Director of the Institute of Physiology in 2019, István immersed himself into the task of reforming the institute with his characteristic drive and determination. Additionally, he exerted immense energy in seeing one of his greatest dreams take flight, which was the creation of a facility accommodating a wide range of super-resolution and advanced fluorescence microscopes. In Spring 2021, the equipment was about to be set up at its new premises, designed by himself; but tragically, he never saw this completed. The centre was launched at its final location and named István Ábrahám Nano-Bio-Imaging Core Facility in December 2021.